There are many reasons why you would need to show off some tweets in your blog posts. You might want to do so while…

Reasons could be plenty, but how will you do it? Binny V A presents the app that you had been waiting for. (You might remember him, he is the one who did 13 WordPress plugins in 13 days)

First let me show you an example. This is a piece of the conversation I had with my friends from Twitter Coffee Club.

Tweet Freezer asks you two questions in the normal mode.

1. What should it search for to freeze. This is where you enter the search term, like the hash tag of the event you are writing about. In the above example, I used the search term #coffeeclub, we often tag all our chit chat with the same tag.

2. The list of users whose tweets you would like to display. This is an optional field. Enter the list of usernames (comma separated without spaces in between). 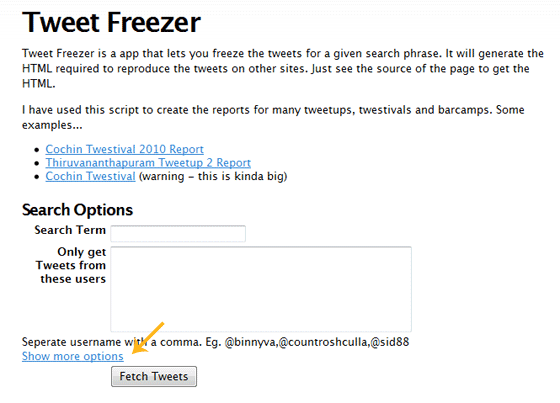 The Show More Options link gives you options to edit the default format of the output, or tell the app only to fetch tweets after a particular tweet (then you have to give the tweet id) or after a specified date.

Each Tweet fetched is included in a class named tweet. You will have to add the following css to your stylesheet, style.css.

You might have to modify some values depending on your blog’s layout.

If you have any issues, ping @BinnyVA or leave a comment. Make good use of Tweet Freezer.