Home › Guest Posts › The Development of Ocean City Over the Centuries

The Development of Ocean City Over the Centuries

The sunshine and the surf of Ocean City in Maryland have been successful in attracting visitors (and settlers) since the time of the Algonquian tribe’s first arrival on the beaches to fish.

It was not until 1524 when Europeans became privy to the locale when Giovanni da Verrazano came upon the area while surveying parts of the eastern coastline. By the mid-17th century, British colonists had settled in the area after moving northwards from Virginia. 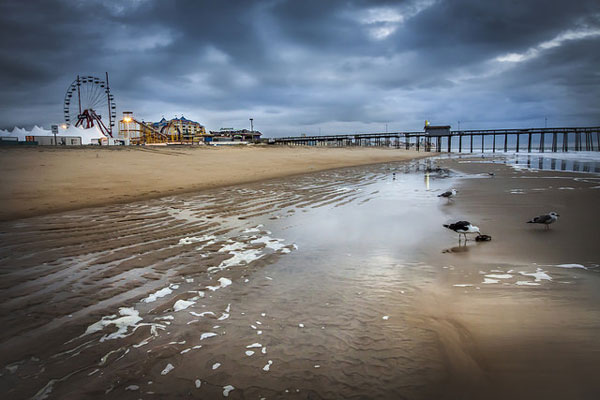 By virtue of Ocean City’s isolated nature as a barrier island, what is now a city was to remain a small fishing village until 1875, at which point in time the Atlantic Hotel opened to visitors. And in the following year, a resort was born after the railroad bridged over Sinepuxent Bay.

In 1878, the U.S. Life-Saving Service, which was the forefather of today’s Coast Guard, set up a station in the town. The second station, which was built in 1891, now serves as a museum to salute those brave souls to have worked there over the ensuing decades.

The first boardwalk was built in 1900. Shortly after, Trimper’s Amusements opened for business. Quite unlike these days, however, the boardwalk did not represent a year-round fixture. In fact, the boards were taken up just prior to the onset of winter, and stored until the warmer weather arrived in the spring.

In August, 1933, a dramatic storm carved a new channel stretching from the bay over to the ocean. The inlet was made permanent by engineers, and along with the harbor, Ocean City was to become a premier fishing destination.

In 1952, a bridge – the Chesapeake Bay Bridge – provided fast and direct access to Washington from Baltimore. Then, in 1964, the bridge/ tunnel afforded a connection to Virginia Tidewater. Thus, in just a few years, Ocean City had established itself as a favored resort for visitors traveling from the entire eastern seaboard.

Now, Ocean City stretches over a 10-mile expanse of beautiful beaches, all the way from the Inlet over to Delaware’s state line. The classic wooden boardwalk affords almost three miles of games, food, and shopping facilities. The Roland E. Powell Convention Center makes for a very popular site for conventions of all sizes. And with over 9,500 hotel rooms, together with some 21,000 condominiums, there’s accommodation aplenty to meet any requirement and taste.

The classic wooden boardwalk at Ocean City’s beachfront was named as America’s finest by The Travel Channel. It was given the accolade of being listed in the United States’ top 10 by National Geographic. And it was said to be among the nation’s top boardwalks in terms of food by USA Today. 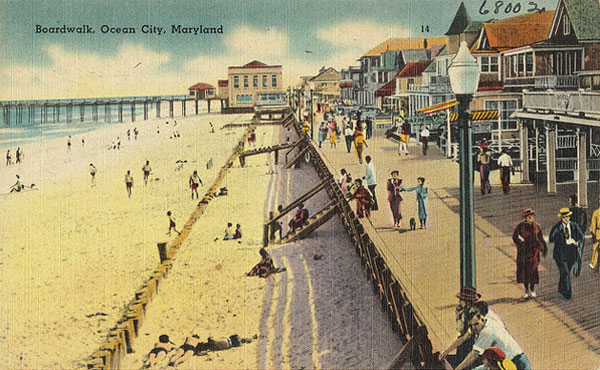 Whether it’s during the daytime, or it’s late at night, there are always activities on the boardwalk, and oftentimes, they are free.

For the kids, there are arcades and amusements. Jump on the Ferris wheel to get some spectacular views over the city and the ocean. Take a risk on the roller coaster, or opt for the gentle-paced and beautiful 1902 carousel.

If you’re hungry, it will not last. Select from the amazing Delmarva fried chicken or the remarkable Maryland crab cakes. Go for a mouthwatering cheeseburger, or savor one of the smoky pit beefs. Partake in some freshly-baked pizza, or try the sumptuous French fries. Ocean City dining means that the menu is endless.

If you still have the available space, you can then try for dessert. Choose from luscious saltwater taffy, thick creamy fudge, sweet caramel popcorn, rich ice cream in all flavors, hot funnel cakes, chocolate-covered strawberries, or cotton candy.

After your meal, you’ll be about ready to hit the shops. And there’s plenty of opportunity for that, not only along the boardwalk itself, but also on many of the side streets, too.
During the night, the boardwalk comes alive with music. Over the summer months, there are plenty of family activities along the beach on every night, inclusive of movies, concerts, and also beach Olympics.

What’s more, you can choose from accommodation that’s on the boardwalk’s doorstep. There’s a huge selection of hotels, motels, and condominium accommodation, with rooms and amenities on offer to fit in with any family or group’s requirements.